At the Gates of Dawn

by Kingdom of the Holy Sun 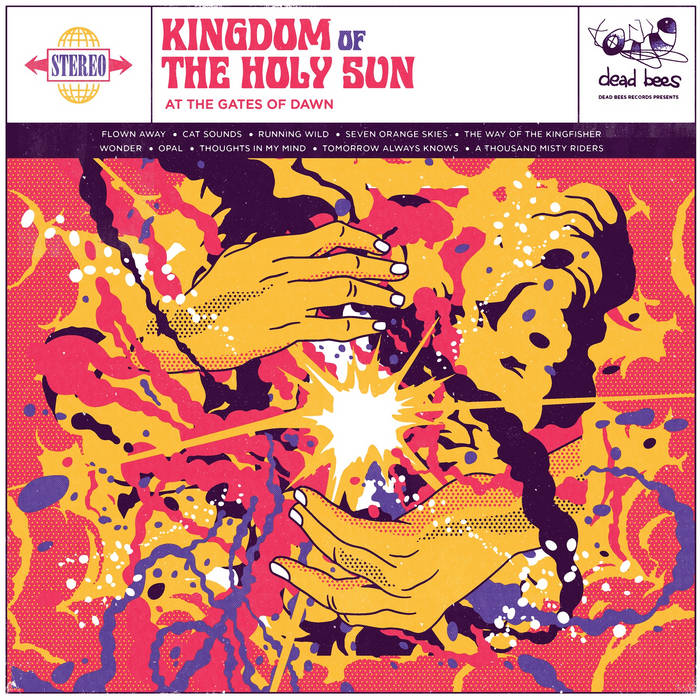 A quick internet search of Kingdom of the Holy Sun reveals that the Seattle, WA band’s music has found eager ears all over the world. That may seem odd for a band just starting to gain traction, but Kingdom of the Holy Sun’s true domain has never been earth, let alone the United States. The 6-piece delivers cosmic sounds through their garage tinted brand of psychedelia, whisking listeners away on otherworldly journeys. Their 2016 release, At The Gates of Dawn, features all the cosmic appeal of earlier albums with more focused song writing, resulting in 10 tracks you can sing a long to as well as get lost in. For those unfamiliar with the band’s latest offering, At The Gates of Dawn lead track and song of the day “Flown Away” is the perfect place to start. The track offers a minute of shimmering instrumentation featuring a buzzing guitar and the elegant canter of strings playing tug-of-war over the lead melody before rolling vocals take the forefront. It is a meandering affair that will have even the most grounded listeners floating away among the sonic clouds of Kingdom of the Holy Sun.

It may not be that sunny in Seattle most of the year, but Kingdom of the Holy Sun are channeling some serious California summer magic on their newest full-length. You can hear those beach tremors pulsating out of the warm organ sounds, jangly guitar riffs and Jim Morrison croons. Consider yourself lucky here in 2016. 50 years ago, you had to wander the desert for 3 days on nothing but peyote to catch this kind of cosmic vibration.

Luke Szymczak
Anything Goes
97.4FM Dunoon, Scotland, UK
Not for the first time do we see Kingdom of the Holy Sun as Featured Artist. This is the second time featured on the show. The Seattle Psych band feature on this weeks show with tracks from their upcoming album At The Gates Of Dawn. The bands latest offering is pure Club A Go Go beat influenced by bands like The Doors, The Seeds, 13th Floor Elevators and Electric Prunes. This album is up their with recent neo psych bands also coming out of America like The Spyrals, Night Beats and Black Angels. The band have gone in a different direction since their earlier releases. At The Gates Of Dawn is a nice upbeat garage album, the band use the full array of sounds and effects available to them, nice fuzzy tones, wha-wha and jangling guitars, lovely harmonies in the Byrd’s style with swirling electric piano riff’s accompanied by some solid beat drumming. At the Gates of Dawn is another quality psych album coming out of the ever blossoming scene.

At The Gates of Dawn is the forthcoming album from Seattle's Kingdom of The Holy Sun, following last year's The Return of The Sun Kings. The new album, to be released July 31st, will be the band's second on Dead Bees records, but their digital discography goes back to 2012. During those 4 years the band has established their unique sound, and each release has been better than the last.

The new album builds on their already-established sound- coined "Cascadian Psychedelia" by the band themselves. Part psychedelia, part shoegaze; with elements of The Doors, The Brian Jonestown Massacre, and The Black Angels blended together in a way that is uniquely their own.

At The Gates of Dawn's 10 tracks are perfectly paced, with songs that are excellent individually but even better enjoyed within the soundscape of the full album. The album opener, "Flown Away", a sunshine-y, tambourine-shaking jam quickly draws the listener in and, at nearly 5 minutes, has plenty of time to get them fully hooked. This is followed by "Cat Sounds", the first single to be released from the album: a driving, pulsating march with vintage garage vibes and a blend of vocals and organ that showcase the Doors' influence while keeping a modern edge.

The next 2 tracks, "Running Wild" and "Seven Orange Skies", both clock in at 3 minutes or less and continue the driving backbeat. Each tune has it's own vibe- "Running Wild" gives us an ultra cool guitar hook reminiscent of 60s spy themes, while "Seven Orange Skies" pushes the tempo to a near-frantic pace, the vocals and organ commanding attention.

The midway point of the album, "The Way of The Kingfisher", is the album's longest track at nearly 7 minutes, and is a complete change from the pace set by the album's first 4. Slow building, it begins with bongos, acoustic guitars and echo-heavy organ chords, repeating for over a minute and becoming slightly hypnotic. As the vocals come in, the song begins to grow, and the remaining 5 minutes become a tribal journey laced in reverb and THC. Guido Anselmi's vocals become much like a chant, echoing and spinning through the haze of guitars and percussion.

Tracks 6-9 bring us back to Earth- faster paced, more concise tunes characterized by strong basslines, guitar riffs, and organ hooks: "Wonder" is a freight train, snapping us out of the haze of "Kingfisher"; "Opal" is a sunny pych-pop jaunt. "Thoughts In My Mind" is the album's heaviest, most definitively garage track- a dark, heavy burner with sexy guitars riffs and sing-along background vocals. "Tomorrow Always Knows" is a jangly pop song, its guitar line reminiscent of The Monkees' "Pleasant Valley Sunday"- though as the track moves forward it begins to build intensity, until reaching its peak as it comes to a close.

The final track of the album, "A Thousand Misty Riders", concludes the album with 6 and a half minutes of pop-psychedelia that Syd Barrett would certainly enjoy (the track name is a lyric in Pink Floyd's "Matilda Mother").

At The Gates of Dawn is a piece of Cascadian Psychedelia that the whole world can enjoy.

It may not be that sunny in Seattle most of the year, but Kingdom of the Holy Sun are channeling some serious California summer magic on their newest full-length. You can hear those beach tremors pulsating out of the warm organ sounds, jangly guitar riffs and Jim Morrison croons. Consider yourself lucky here in 2016. 50 years ago, you had to wander the desert for 3 days on nothing but peyote to catch this kind of cosmic vibration.


ATTENTION:
We always mark the accurate value of our merchandise, and will not mark items as "gift" as that is against the law.

Bandcamp Daily  your guide to the world of Bandcamp

Featured sounds from Fly Lo and Ahmed Idris, plus Mother Nature hops on to drop off new project